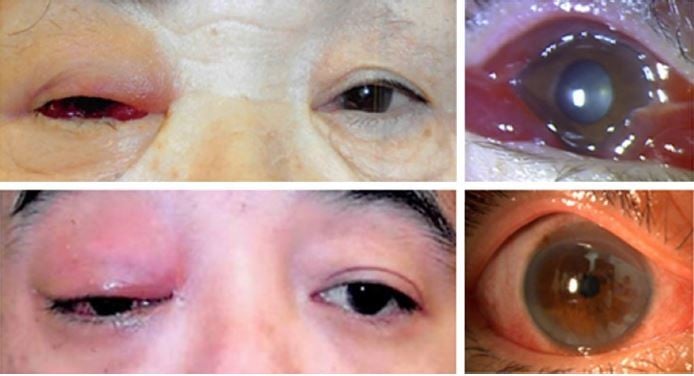 Purpose: Idiopathic orbital inflammation (IOI) and orbital cellulitis can present similar clinical features, and the diagnoses of these two disorders are sometimes confused. The purpose of the present study was to determine whether or not inflammatory markers in the blood can be useful to differentiate between IOI and orbital cellulitis in cases with acute eyelid erythema and edema.
Subjects and methods: In this retrospective single-institute study, we reviewed the medical records spanning the past 10 years at the Department of Ophthalmology, Osaka Medical College Hospital, Takatsuki, Osaka, Japan, and found 45 cases, with patients >15 years of age, with presumed IOI. Their blood samples were obtained within 5 days after the onset of IOI. Of those cases, 15 patients (10 males, 5 females, mean age of 56.9 years; range 38–76 years) presented acute eyelid erythema and edema, and were initially misdiagnosed as orbital cellulitis. Thus, inflammatory markers in the blood (ie, white blood cells [WBCs] and C-reactive protein [CRP]) of those 15 patients were analyzed with 17 patients (10 males, 7 females) having orbital cellulitis. The receiver operating characteristic curve analysis was performed to determine the optimal cut-off values.
Results: The mean ± standard error (SE) levels of the WBC were 6.80±0.70×10³/µL in the IOI patients, and 8.54±0.91×10³/µL in the orbital cellulitis patients, and no significant differences were observed (P=0.15, Student’s t-test). However, the mean ± SE levels of CRP were 1.04±0.43 mg/dL in the IOI patients, yet were significantly increased to 4.65±1.21 mg/dL in the orbital cellulitis patients (P=0.01, Student’s t-test). The area under the curve value was 0.80 and the optimal cut-off value was 0.43 for orbital cellulitis, with sensitivity and specificity being 82% and 73%, respectively.
Conclusion: The findings of this study indicate that CRP may be useful in distinguishing patients with idiopathic orbital inflammation from those with orbital cellulitis.