An unusual case of prostate tuberculosis: a case report 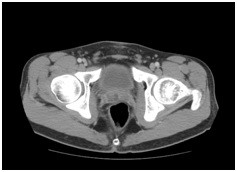 We present a case of a 32-year-old immunocompetent Iranian male who presented to the emergency room with a generalized tonic-clonic seizure lasting for 3 minutes. He denied any history of trauma, fever, or previous seizures. Furthermore, he did not have any genitourinary symptoms, including dysuria, hematuria, or penile discharge. A computerized tomography (CT) scan of the head failed to show any acute central nervous system insult.

After that, the patient was admitted to the hospital. Prior to this admission, he gave history of an admission 12 months ago to a hospital outside the country, where he complained of fatigue, weight loss, and fever. Reports from the hospital showed that he also had chronic moderate ascites and a left pleural effusion. However, several laboratory and imaging tests were done and it was concluded that there was no evidence of infectious disease, chronic liver disease, or malignancy. It was recommended that he may need more investigations or a laparoscopy with peritoneal tissue biopsy, which was not done.

Upon the latest admission, the respiratory rate was 12 breaths per minute, the body temperature was 36.9°C, and the blood pressure was 112/70 mmHg. The patient had mild tachycardia of 109 beats per minute. Physical examination was unremarkable including the respiratory system examination. Digital rectal examination was not performed since the patient did not have any genitourinary or gastrointestinal symptoms. During this hospitalization, the patient received anti-epileptic treatments and multiple investigations were done. The laboratory investigations, urine routine and microscopy, cultures, virology screen, including human immunodeficiency virus, as well as the autoimmune markers did not show any significant issues. Also, three sets of sputum acid-fast bacilli smears were done, which were all negative. Further invasive tests were performed including endoscopy and colonoscopy which were unremarkable. A lumber puncture was also performed with a normal initial pressure, 0 mm3 cell count, glucose of 4.1 mm per liters, and protein of 764 mg per liter. At the same time the serum glucose was 6 mmol per liter. A magnetic resonance image of the brain was done concluding multifocal enhancing foci suggestive of an infective process (Figure 1).

Due to his previous history, CT-chest, abdomen, and pelvis were also done. The chest-CT was unremarkable. The abdominal CT showed mild peritoneal ascites with evidence of mild splenomegaly. The ascetic fluid taken was translucent and yellow in color and the serum-ascites albumin gradient 5 gram per liter (0.5 gram per deciliter). Furthermore, the analysis was negative for Ziehl–Neelsen, gram stain, and culture.

The case was discussed with the patient and he agreed to start anti-tuberculosis treatment and to have a trans-rectal biopsy of the prostate. The biopsy showed multiple slides of necrotizing granulomata suggestive of tuberculosis (Figure 3). Ziehl–Neelsen stain was also performed, and the diagnosis of miliary tuberculosis was confirmed (Figure 4).

He was started on anti-tuberculosis therapy with isoniazid, rifampicin, ethambutol, pyrazinamide, and pyridoxine for 12 months. At follow-up the prostate biopsy tubercle bacilli culture result came back positive. The patient was asymptomatic with a normal physical examination and laboratory tests with no drug side effects.

Written informed consent was obtained from the patient for publication of this case report and accompanying images. We acknowledge Senior Dr Mohammad Jasem Al Kandari and Dr Smiley Anne George in the Department of Pathology in Mubarak Al Kabeer Hospital, Kuwait for their insightful contributions and preparing the histopathology slides.

AJA and MAA both contributed equally by examining the patient, following up the patient, writing the manuscript, and reviewing the literature. Both authors read and approved the final manuscript.

The authors declare that they have no competing interests.