Back to Journals » Clinical Ophthalmology » Volume 8 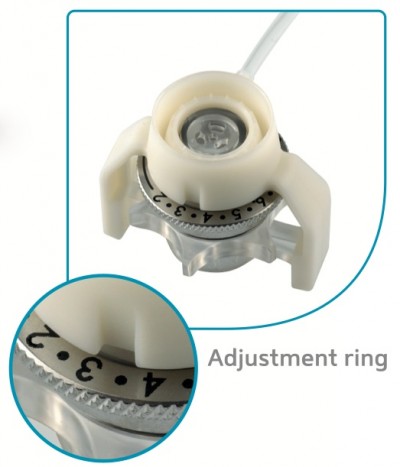 Background: The Moria single-use adjustable depth trephine is a device that allows a goal trephination depth to be set prior to the surgical procedure.
Methods: Eleven fresh human cadaveric eyes were trephined using 8.0 mm Moria single-use adjustable vacuum trephines. Prior to trephination, the average corneal pachymetry in the peripheral 7–10 mm range was obtained using anterior segment optical coherence tomography. The trephination depth was set to 80% of that value. Light microscopy was used to image anteroposterior cross-sections of each corneal specimen. Digital protractor software was used to evaluate the trephination angle, depth, and length. All adequately processed specimens were included in the analysis. In addition, trephination angle data from a previous publication by Moshirfar et al were used as a comparison with those of this study.
Results: Trephination analysis of depth compared with pachymetry revealed a mean of 83.7%±6.53% (95% confidence interval 79.8–87.6). Maximum and minimum trephined depths were 95.35% and 71.3%, respectively. Trephination depth compared with angular corneal thickness yielded a mean of 66.2%±4.79% (95% confidence interval 63.0–69.4). Maximum and minimum depths were 73.7% and 59.7%, respectively. Analysis of trephination angle yielded a mean of 130.2±3.57 degrees (95% confidence interval 127.8–132.61). Maximum and minimum angles were 135.5 degrees and 126 degrees, respectively. The standard deviation of the trephination angle of the Moria trephine was found to be significantly less than that of Hessburg-Barron and Hanna trephines calculated in the previous study.
Conclusion: The Moria adjustable vacuum trephine is an accurate method of trephination when a specific depth is desired. Further investigation is needed to determine the relevance of this in relation to deep anterior lamellar keratoplasty.

The Moria (Moria Surgical, Antony, France) single-use adjustable depth trephine is a new device that combines the advantages of a vacuum-based anteriorly performed system with an additional benefit, ie, an adjustable depth meter (Figure 1).1–3 The creation of precise trephination incisions is vital in several surgical procedures. The most important of these is deep anterior lamellar keratoplasty (DALK), which requires removal of the corneal epithelium, Bowman’s membrane, and stroma down to the deep layers.4 The use of a corneal trephine to help with this process is necessary in most variations of DALK. An appropriately performed trephination helps the surgeon establish a cleavage plane that ideally separates Descemet’s membrane from stroma.5–7 However, the goal depth of trephination is not consistent amongst authors, and a range is often given. Examples include 60%–80% depth and 300–400 μm.4,5 Some surgeons estimate the depth by counting blade rotations. This likely results in significant variability. Anwar and Teichmann stressed the importance of using a calibrated trephine to increase accuracy.5

This paper addresses a new adjustable corneal trephine, which proposes to more accurately standardize trephination depth, angulation, and centration. Proposed advantages of this new trephine include central corneal flattening for straighter cuts and an adjustable depth meter that is labeled in 50 μm increments, but can be calibrated to any depth desired. This study aims to evaluate these claims on fresh human cadaveric eyes, using anterior segment optical coherence tomography (AS-OCT; Visante, Zeiss, Jena, Germany) and histopathologic evaluation of depth and angulation.

Eleven fresh human cadaveric eyes were trephined using 8.0 mm Moria single-use adjustable vacuum trephines. Tissue was donated for research purposes from the Utah Lions Eye Bank, Salt Lake City, UT, USA. Each specimen was deemed unsuitable for transplantation because of failure of serologic screening. Using a 27-gauge needle and a 5 cc syringe, Balanced Saline Solution (Alcon, Fort Worth, TX, USA) was injected into the vitreous cavity to obtain an intraocular pressure of 40±3 mmHg. The globes were then stabilized on a metallic base, and AS-OCT was performed. Using the average corneal pachymetry in the peripheral 7–10 mm range (Figure 2), as derived from the AS-OCT, the trephine depth was adjusted to 80%. For example, for a 1,000 micron cornea, the trephine was set at 800 microns. The trephine was placed centrally on the cornea and proper vacuum suction was confirmed. Trephination proceeded until a hard stop was felt. Each globe was trephined by the same operator using a new trephine for each eye. An incision was then made 1 mm posterior to the limbus, and curved scissors were used to cut circumferentially leaving the cornea with a small scleral rim. The tissues were processed using standard histopathologic processing techniques. Corneoscleral buttons were cut in an anteroposterior manner in eight equally spaced meridians, and light microscopy was performed on each section.

Depth was then calculated as a percentage of each respective corneal thickness rather than an absolute value (Figures 3 and 4). This was done to account for tissue shrinkage that occurs during tissue processing. In no case were all eight sections in proper condition for study inclusion. Inadequate sections (eg, folded or damaged tissue) were excluded from analysis. All adequate cross-sections were included, those from the same sample were averaged, and numerical means were obtained. Standard deviations and 95% confidence intervals (CIs) were calculated to evaluate the accuracy of the trephine.

Additionally, raw data were obtained from a previous study performed by Moshirfar et al (Figure 6). Trephination incision angles obtained using Hessburg-Barron (Katena Products Inc, Denville, NJ, USA) and Hanna (Moria Surgical) trephines were compared with those of the Moria trephine using means and standard deviations. In the previous study, the protocol for trephination was identical to that of this one except for the type of trephine used and the fact that a full thickness corneal incision was produced.8

The Moria adjustable-depth trephine is an anteriorly performed, vacuum-based system that has the ability to select a goal depth at which trephination is halted. This allows for increased precision when performing DALK and penetrating keratoplasty, when the surgeon wants to stop short of a complete trephination.

There is, however, a major flaw in using imaging modalities such as AS-OCT preprocedurally to calculate corneal thickness. AS-OCT is limited in its ability to obtain anything other than perpendicular measurements of corneal thickness as the basis for depth calculation.9 Due to the prolate nature of the cornea and the peripheral location at which the trephination blade rests, trephination proceeds at an angle not directly perpendicular to the surface of the cornea. As a result, the blade must pass through a greater amount of corneal tissue before penetration into the anterior chamber than was originally estimated by the AS-OCT. This results in an underestimation of incision depth.

Figure 4 illustrates the angular nature of both the trephination incision (red brackets) and the ACT (black brackets). A comparison of these two data sets yields a mean depth of 66.2%. As expected, the percentage depth is less (17.5%) than the comparison between incision depth and pachymetry. This error stems from the inappropriate selection of pachymetry for use in depth calculations. Had ACT been used preprocedurally, a mean incision depth of approximately 83.7% would have been observed.

Finally, the narrow range of angles produced by the Moria trephine is important because it indirectly affects the depth penetration. This is illustrated by the significant difference in incision angle standard deviation compared with the two other trephines. If the microns of cornea through which the trephination blade can penetrate is kept constant, an incision created at an angle of 100 degrees to the corneal epithelium is much closer to penetration into the anterior chamber than one created at 150 degrees. As a result, a consistent incision angle is a vital step in creating accurate incision depth.

Limitations of this study include the relatively small sample size and the possible effects of histopathologic processing on tissue thickness and angle measurements. While the tissue thickness is undoubtedly affected by histopathologic processing, all corneal tissue would be expected to shrink symmetrically, leaving the relative percentages unchanged. Our prior study used AS-OCT to measure post-trephination thickness; however, these corneas were trephined completely. As this was a partial-thickness trephination, shadowing prevented accurate measurements of post-trephine depth. This resulted in the requirement for histopathologic analysis of depth and trephine angle.

This study suggests that the Moria adjustable-depth corneal trephine is an accurate method for trephination to a specific corneal depth, with a mean depth of only slightly greater than intended. In addition, the standard deviation of trephination angles of the Moria trephine was significantly less than those observed with the Hessburg-Barron and Hanna trephines. This suggests a difference in consistency of clinical results. It is vital that surgeons be diligent about performing depth calculations using ACT. Imaging modalities measuring pachymetry may be used as long as standardized or personalized formulas are used to convert to ACT.

The authors report no conflicts of interest in this work. No funding was provided by Moria Surgical.