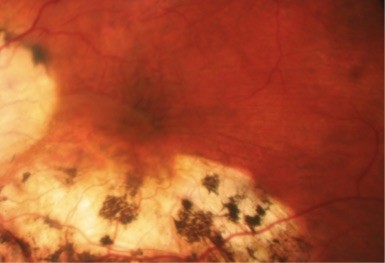 Background: Hypotony maculopathy (HM) changes may persist, and visual acuity remains poor, despite normalization of intraocular pressure (IOP). The aim of this study was to evaluate the visual and anatomical results of pars plana vitrectomy (PPV), internal limiting membrane (ILM) peeling, and 20% SF6 gas tamponade in five myopic patients with HM.
Methods: This retrospective interventional study was conducted at the Barraquer Center of Ophthalmology, a tertiary care center in Barcelona, Spain, and included five eyes from five consecutive patients (aged 55.4±13.1 years) with HM caused by different conditions. All the patients were treated with 23-gauge PPV, ILM peeling, and 20% SF6 gas tamponade. Preoperative and postoperative evaluation was performed using anterior and posterior biomicroscopy and best corrected visual acuity (BCVA) by logMAR charts.
Results: Before surgery, median spherical equivalent was -13.1 (range -7, -19) diopters of myopia. Preoperatively, four cases presented IOP <6.5 mmHg for 3 (range 2–8) weeks. In three of these four cases, IOP >6.5 mmHg was achieved over 16 (range 16–28) weeks, without resolution of HM; increased IOP was not achieved in the remaining case treated 2 weeks after diagnosis of HM. One case presented IOP >6.5 mmHg with HM for 28 weeks before surgery. Preoperative BCVA was 0.7 (range 0.26–2.3) logMAR, and 0.6 (range 0.3–0.7) logMAR and 0.5 (range 0.2–1) logMAR, respectively, at 4 and 12 months after surgery. There was no statistically significant difference between preoperative and postoperative BCVA. Hyperpigmentation lines in the macular area were observed in three cases with hypotony. These lines progressed after surgery despite resolution of the retinal folds in the three cases, and BCVA decreased in parallel in two of these cases.
Conclusion: PPV with ILM peeling followed by gas tamponade is a good alternative for the treatment of HM in myopic patients. However, persistent choroidal folds may compromise BCVA. We therefore recommend initiating treatment as early as possible.