Back to Journals » International Journal of Women's Health » Volume 7 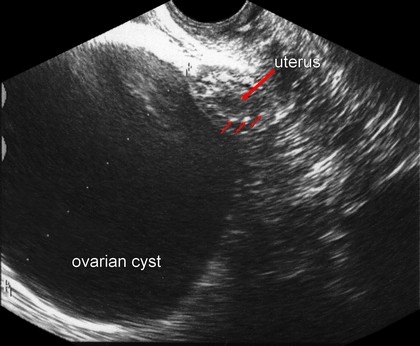 Abstract: This paper describes the case of an 83-year-old patient with hypertension, diabetes, obesity (body mass index – 38), congestive heart failure, and history of cardiac surgery, who was referred for a diagnostic–therapeutic decompression of a large, symptomatic ovarian cyst. Due to anatomical conditions, the only safe way was a transfundal puncture under mini-hysteroscopic and ultrasound guidance. A puncture with aspiration of 300 mL of serous fluid from the cyst was performed without technical problems and complications. Cytology showed no cancer cells in the examined liquid. Relief from pain and compression discomfort was achieved in the patient. This case shows the possibility of combining ultrasound and minimally invasive diagnostic methods like hysteroscopy in selected clinical situations.

The 83-year-old patient with hypertension, diabetes, obesity (body mass index – 38), congestive heart failure, history of cardiac surgery, and with ultrasonographic diagnosis of ovarian cyst was referred to the Department of Obstetrics, Gynecology and Oncology of Warsaw Medical University due to abdominal pain. In the ultrasound imaging, a cyst with a diameter of 95 mm with homogeneous, serous, anechoic fluid inside was visible (Figure 1). The wall of the cyst was smooth and regular with no endocystic vegetations and no suspected flow in a Doppler ultrasound exam. The serum Ca-125 level was low (6 IU/L). There was no free fluid in the pouch of Douglas. Because of multiple severe contraindications for surgical treatment and a potentially low risk of malignancy of the cyst, we decided to perform the puncture to decompress the cyst, reduce the pain, and establish the diagnosis to determine the nature of the cyst by cytological examination of the obtained fluid. The location of the cyst made a safe performance of the puncture through the abdominal wall or the vaginal vault impossible (several bowel loops in the vicinity of the cyst). Due to the proximity of the lower pole of the cyst to the fundus of the uterus the decision of transfundal puncture was taken. Because of a long and narrow atrophic vagina and a strongly anteverted, small uterus we decided to use a vaginoscopic approach – with no speculums and tenaculums.1,2 In a short-time intravenous anesthesia, the hysteroscope (Bettocchi type with 2.9 mm telescope diameter) was introduced by vaginoscopic approach into the uterine cavity followed by resection of adhesions in the internal cervical os. After the visualization of the fundus, the puncture site was selected. During this time small movements of the hysteroscope (used as uterine manipulator) leading to optimization of the position of the uterine fundus related to the cyst wall were helpful. A long 16 gauge puncture needle was introduced into the cyst through the Bettocchi’s hysteroscope 5 Fr working channel under continuous transabdominal ultrasound guidance (Figure 2).

Three-hundred milliliters of liquid with a yellowish tint were drained under continuous control of the needle position. There was no bleeding from the puncture site after withdrawal of the needle. A transvaginal sonographic control just after the surgery showed complete emptying of the cyst, no evidence of free fluid in the abdominal cavity, and no evidence of bleeding into the peritoneal cavity from the ovary or the uterine wall (Figure 3).

The patient was discharged home 6 hours after the treatment with clinical improvement (pain relief). Gynecological and ultrasound exam was recommended within 2 weeks, just after the result of cytological examination of the fluid was obtained. No cancerous or suspect cells have been found in the examined fluid.

Generally, punctures of ovarian cysts remain controversial.3 In the opinion of French authors (Audra, Dargent, Akiki, Mathevet et al), if there is low risk of malignancy – low Ca-125 levels and reassuring results of ultrasound evaluation with Doppler velocimetry analysis – such therapy can be acceptable.4–6 Transfundal puncture was earlier described as one of the methods for induction of pneumoperitoneum in laparoscopy in selected (ie, obese) patients.7,8

Although the authors performed a blind puncture, success rate was approximately 96%. The needle was inserted through the fundal uterine wall in the midline of the uterus and none of the patients had any clinically significant bleeding.

The authors present a possibility of ovarian cyst puncture in this way. Safety of this method is assured by continuous ultrasound guidance simultaneous with mini-hysteroscopy. Especially in old patients, with vaginal and cervical atrophy, adhesions, and poor uterine mobility, the use of the Bettocchi hysteroscope for inserting the puncture needle under direct visual control helps in avoiding complications such as uncontrolled uterine perforation with big vessel, bowel or bladder injury. Further studies are needed to assess the safety and efficacy of this method, but the authors believe that through continuous monitoring of the needle passage (hysteroscopic and sonographic) and possibilities of manipulation of the uterus relative to the cyst (using a hysteroscope as a manipulator), this method can be the only reasonable diagnostic–therapeutic option in some cases. It also confirms the need and the opportunity for the simultaneous use of several diagnostic methods to support and improve the safety and effectiveness of some minimally invasive methods of treatment.