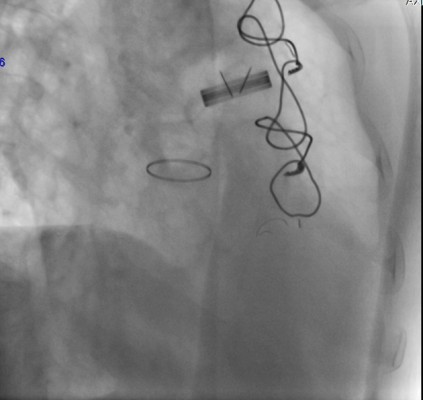 Abstract: Pulmonary prosthetic valve thrombosis is a serious and rare complication with high mortality. Using reteplase for treatment of prosthesis thrombosis is rarely reported. We report the first case in Iran of a thrombosed pulmonary valve in a patient who had undergone repair of tetralogy of Fallot, which was successfully treated twice with intravenous thrombolytic therapy with reteplase.

Valve thrombosis is a serious complication in right-sided prosthetic valves in adults, specifically those with congenital heart disease.1 Thrombosis of pulmonary valve (PV) prosthesis is very rare.2 The rate of occurrence of obstructive prosthetic valve thrombosis (PVT) is 0.3%–1.3% in patients per year.3 Patients with right-sided mechanical thrombosis usually present signs of right heart failure, including peripheral edema and ascites. The prosthetic valve click might be inaudible in a heart examination. In echocardiography, it can demonstrate higher echogenicity on the prosthesis, lower movement of the disk, and high prosthetic valve gradient.4 Its management includes surgical valve replacement, thrombectomy, or thrombolytic therapy, as the most recently developed treatment option.5 More specifically, data on the treatment of mechanical PV thrombosis are nonexistent. A study with a small sample size of 22 patients reported the incidence of mechanical PV thrombosis as 12%, yet it failed to mention any treatment response.6 There was a case series study on fibrinolytic therapy for mechanical PV thrombosis, in which streptokinase was used in 24 cases and alteplase in one case.7 Reteplase is a recombinant plasminogen activator that is indicated for the thrombolytic treatment of suspected myocardial infarction with persistent ST elevation or recent left bundle-branch block within 12 hours and is used for mechanical valve thrombosis that remains controversial.8 In accordance with the lower occurrence of right-sided prosthetic valve placement, and therefore thrombosis, data on thrombolytic therapy are limited. This study presents a case of previous PV replacement (PVR) with past medical history of surgery for tetralogy of Fallot (TOF) treated with reteplase.

The case was a 26-year-old male with TOF. At the age of 8 years, the case underwent surgical reconstruction of the right ventricular outflow tract with a porcine pericardial monocusp patch and closure of the ventricular septal defect. Fourteen years after surgical reconstruction, due to severe pulmonary and aortic valve regurgitation (PR and AR) and deterioration of symptoms, the pulmonary and aortic valves were replaced (PVR and AV replacement [AVR], respectively]) with two mechanical prosthetic valves (Master series; St Jude Medical, Santa Clara, CA, USA), sequentially; the sizes of the prosthetic valves were 25 mm and 23 mm. The patient was on treatment with oral anticoagulant therapy and regular follow-ups, and echocardiographic evaluations were performed during these years. The international normalized ratio (INR) was within the therapeutic range (2.5 IU) during this period by the use of 7.5 mg/day of warfarin. He came to the hospital for his latest follow-up evaluation. The INR was 2.8 IU at the time of presentation. He had no cardiovascular signs or symptoms. Echocardiography demonstrated a substantial change in the peak and mean pressure gradients (PPG and MPG, respectively) across the PV to 71 mmHg and 43 mmHg, respectively, yet the aortic mechanical valve had normal hemodynamic function. The ejection fraction was 55%. Fluoroscopy showed that although the prosthetic aortic valve (PAV) leaflets had normal motion, one of the leaflets of the prosthetic pulmonary valve (PPV) was fixed (Figure 1). Because the patient was clinically and hemodynamically stable, fibrinolytic therapy was preferred for him instead of surgical treatment. Reteplase (10.4 U; Abbott India Ltd, Mumbai, India) was administered as a 10 U bolus dose, followed by a second 10 U bolus dose 30 minutes later. Each bolus was administered as a slow intravenous injection within 2 minutes. Heparin and acetylsalicylic acid (ASA) were also administered before and following the administration of reteplase to reduce the risk of rethrombosis. After 48 hours, fluoroscopy was repeated and it showed partial but not complete improvement of valve mobility (Figure 2); in echocardiography, PPG and MPG were 54 mmHg and 38 mmHg. Therefore, for the second time, he underwent intravenous reteplase therapy. Fluoroscopy after 12 hours showed good and symmetrical opening of the PPV leaflets (Figure 3). At this time, the echocardiography showed complete improvement of the PPV function (PPG and MPG of 18 mmHg and 9 mmHg, respectively). No complications, such as hemorrhage, were noted following reteplase administration. The patient was discharged with warfarin (12.5 mg/day), high therapeutic range of INR (3.5 U), and completely mobile prosthetic PV. He was advised to continue the follow-ups regularly. During the 6 months of follow-up, there was no evidence of recurrent PVT in serial echocardiography nor any other complications. The patient provided written informed consent regarding the publication of case details and any accompanying images.

Thrombosis remains a major etiology of complications and mortality in patients with mechanical prosthetic heart valve, the prevalence of which is between 0.03% and 4.3% per patient per year.9 Patients with a subtherapeutic INR may develop PVT with an acute onset of symptoms. The risk of thrombosis is based on anticoagulation status, type and position of the valve, atrial fibrillation, and ventricular function.10 The major cause of PVT is interruption or inadequate warfarin therapy.11

Additionally, patients with right-sided prosthetic valves are at high risk for morbidity and will be at a higher risk of thrombosis when they undergo repeated surgery. This may be because of their history of multiple valve replacements or complex congenital heart surgeries. This leads to greater use of mechanical valve prostheses in the right-sided heart position.12

In this report, the authors introduced a case of previous TOF and history of PVR and AVR, presented by echocardiographic-based thrombosis while he had therapeutic INR range (2.5 U) without any symptom. To the best of the authors’ knowledge, this is the first case in Iran with this presentation and a rare one in the literature, which resolved with two reteplase administrations.

In previous studies, the effect of thrombolytic agents, such as streptokinase and second-generation recombinant tissue plasminogen activator (tPA), was shown in the treatment of mechanical valve thrombosis.1,2,7,13 Khajali et al7 showed that regardless of the time to PVR and the echocardiographic and fluoroscopic findings, fibrinolytic therapy with streptokinase was effective in the majority of cases of mechanical PV thrombosis. In a series of 28 PV implantations, the 30-day mortality rate was only 3.6%, and no patient needed reoperation at 1 year.12 Taherkhani et al13 evaluated 16 patients who had undergone thrombolytic therapy for definite thrombotic mechanical valve obstruction in the tricuspid or PV position (eight in each position), three of which were TOF cases; different types of thrombolytic therapies showed 81.2% complete response (13/16). They used alteplase in 10 cases and streptokinase in the remaining 6 cases. Their TOF cases were referred with subtherapeutic range and had no recurrence, similar to the current case. All three cases received alteplase and were aged between 8 and 18 years. The current case was an adult and received reteplase.

To the best of the authors’ knowledge, studies on third-generation recombinant tPA, such as reteplase, are limited and are mainly performed or reported on left-sided PVT cases. In this case, we demonstrated that two rounds of thrombolysis lead to nonsurgical development of PVT, which is unique when compared with other studies. Tanieyli et al8 showed the clinical use of reteplase in stuck aortic valve in a female with a history of Bentall operation, which dramatically improved her condition and saved her from surgery. Akhtar et al14 reported the first three cases of recurrent prosthetic mitral valve thrombosis in Pakistan, which were treated with reteplase; this resulted in reestablishment of adequate blood flow across the valve, with reduction of mean gradient to normal. Behzadnia et al15 also reported four cases in their case series with recurrent prosthetic mitral valve thrombosis, which were successfully treated with reteplase. Although there are some rare cases of treatment with reteplase, there are no studies on its effectiveness in resolving PV thrombosis. Data on right-sided mechanical valve thrombosis are still few, and there are only limited case series/reports, as mentioned earlier. Reteplase is a third-generation human tPA16 and is widely used in occlusive thrombotic disorders, such as myocardial infarction.17 Some of its advantages are the long half-life, no need for weight-based dose adjustment, bolus injection instead of infusion, rapid onset of action, greater rate of arterial recanalization in myocardial infarction or ischemic stroke patients, and lower rates of serious complications, such as bleeding and fibrinogen depletion. Thrombolytic therapy with third-generation tPA is a safe and effective approach for treating mechanical PV thrombosis and can be used in patients instead of surgery. This is the first case report on the use of reteplase for PVT, which was a successful option with no complications and good survival.

There are major complications, such as thromboembolic and hemorrhagic events, in thrombolytic therapy, which increase the risk of cerebral embolism and intracranial hemorrhage,5 yet the risk of these rare events is preferred over surgical interventions. Studies on reteplase treatment in terms of its efficacy for PV thrombotic obstruction are very rare. The current research shows the effectiveness of reteplase with no complications. Thus, reteplase can be the first-line treatment for patients with right-sided thrombosis considering its major contraindications, including active internal bleeding, history of hemorrhagic stroke, recent cranial trauma or neoplasm, hypertension, or diabetic hemorrhagic retinopathy, which may limit this therapeutic option for some patients. It can also be the treatment of choice for patients with PVT, who are at high risk for surgery or who have low bleeding risk.