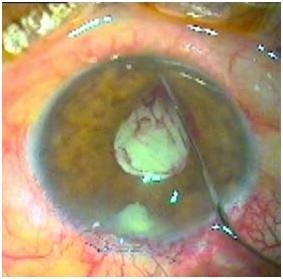 Purpose: The aim of this study was to compare the results of phacoemulsification through a small pupil using minimal iris manipulation versus phacoemulsification through a well-dilated pupil.
Methods: This prospective randomized control (comparative) study comprised 78 patients (group I) with a maximally dilated pupil size of ≤4.00 mm and 45 patients (group II) with dilated pupil size of ≥7.00 mm. In group I patients, only viscodilation and minimal push-and-pull iris stretching with two collar-button iris-retractor hooks were utilized without iris manipulation. Phacoemulsification was performed by two senior surgeons and the technique used consisted of either stop and chop or quick chop, infusion/aspiration of lens cortex, capsular bag refill with ocular viscoelastic devices, and implantation of an acrylic foldable intraocular lens. Patients were examined on the first day and 1 month postoperatively.
Results: Forty-six eyes of group I patients had pseudoexfoliation syndrome, eleven eyes had previous glaucoma surgery, 14 eyes had angle-closure or open-angle glaucoma, and seven eyes had posterior synechiae with iritis. In group I patients, the mean pupil size measured under an operating microscope was 3.2 mm preoperatively, 4.3 mm after viscoelastic and mechanical pupil dilation, and 4.1 mm at the end of a surgical procedure. Rupture of the zonular fibers occurred in six patients of group I and the intraocular lens was implanted in the sulcus. Small iris-sphincter rupture and small hemorrhages occurred in four eyes during pupillary manipulation, but they were not evident at the end of the surgery. In group II patients, no intraoperative complications occurred. Signs of significant corneal edema and iritis were observed more frequently in group I eyes (26 eyes and 20 eyes, respectively) on the first postoperative day in comparison with group II eyes (ten eyes and six eyes, respectively). Intraocular pressure was <20 mmHg in all eyes of both groups. One month postoperatively, the pupil was round and reactive to light, the anterior chamber was quiet, and the cornea was clear in all eyes. The best-corrected visual acuity on Snellen chart was 20/40 (Monoyer’s scale) or better in both groups.
Conclusion: Phacoemulsification through a small pupil using minimal iris manipulation can be safe and exhibits the same results as those obtained with phacoemulsification through normal pupils.