Iron-deficiency anemia with lithobezoar (pica): a rare cause of intestinal obstruction in a 5-year-old Nigerian child 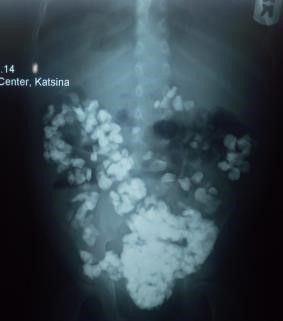 Background: Despite a high prevalence of iron-deficiency anemia (IDA) in developing countries such as Nigeria, intestinal obstruction secondary to lithobezoar (an accumulation of ingested stones within the gastrointestinal tract) is uncommon.
Case presentation: Herein, we report a case of acute intestinal obstruction secondary to ingestion of large pebbles and IDA in a 5-year-old Nigerian boy. The patient was managed conservatively with the use of laxatives and a rectal wash-out, and the pebbles were excreted over 3 days. Oral iron therapy was also commenced with cessation of pica.
Discussion: Although the direction of causal relationship between pica and IDA remains debatable, routine screening for iron deficiency among children with lithobezoar is recommended. Besides managing complications associated with lithobezoar, such as intestinal obstruction, prompt initiation of iron therapy among those who present with features of iron deficiency may be beneficial.

Iron-deficiency remains a leading cause of anemia, with a third of the world population at risk.1,2 Although it is a global issue, iron-deficiency anemia (IDA) is more common among children in developing countries such as Nigeria, with a documented prevalence of 10%–50%.1,3,4 While anemia is the extreme end of the iron-deficiency spectrum, it has also been associated with various neurological manifestations including cognitive impairments and abnormal behavior in the form of pica.5 Pica is defined as the persistent consumption of materials or substances of nonnutritional value, lasting more than a month.5 Although the causal relationship between pica and iron deficiency have been established, the direction is still a subject of debate.6 Some studies have documented the cessation of pica following treatment for IDA, while some have reported unresolved cases despite iron therapy.7–9

Pica is usually observed among children in early childhood; however, its persistence beyond the age of 2 years is considered abnormal.10 Furthermore, studies have attributed many factors or conditions associated with pica, among which are mineral and vitamin deficiency (iron and less commonly zinc, calcium, thiamine, niacin, and vitamin C).10–12 Pica has also been linked with several conditions including developmental disability (autism, severe/profound intellectual disability); mental illnesses (obsessive-compulsive disorder, pathological anxiety, schizophrenia, emotional disturbance, and depression); anemia from sickle cell disease; regular dialysis; and pregnancy.5,13–15

Although the predominant form of pica among children is geophagia (earth eating), a few isolated cases of pebble/stone consumption (lithobezoar) have been reported from Asian countries.16–19 One of the consequences of both geophagia and lithobezoar is intestinal obstruction that often requires intervention.20 Unfortunately, this is not understood by the consumers, thereby generating the need to raise further awareness about pica and its complications.20 In Nigeria, lithobezoar remains an uncommon cause of intestinal obstruction despite a high prevalence of IDA.21,22

In view of this, we present the following case report involving a 5-year-old Nigerian boy with IDA, who presented with features of acute intestinal obstruction following massive ingestion of stones.

A 5-year-old boy was brought into the emergency pediatric unit by his parents with a history of stone ingestion for 2 weeks, abdominal distention and pain for 5 days, and constipation for 2 days. He had a similar episode of stone ingestion at 2 years of age, but stopped after being scolded and monitored closely. There was no history to suggest any psychiatric illness, and developmental milestones were normal. At presentation, he was in painful distress, with mild pallor. The abdomen was uniformly distended with generalized tenderness without guarding. Rough masses were palpated in all the abdominal quadrants with hyperactive bowel sounds. Digital rectal examination revealed multiple stone particles palpable in the rectum. The anthropometric parameters were lower for the patient’s age, with a weight of 14 kg (fifth percentile for age), height of 102 cm (tenth percentile for age), mid-arm circumference of 12.5 cm, and a weight for height of <–1 SD. Other systemic examinations were unremarkable.

He was treated with laxatives (liquid paraffin) along with a rectal wash-out and the pebbles were excreted over 3 days (Figure 2). The patient was discharged on the fifth day of admission. At discharge, oral iron therapy was prescribed (6 mg/kg of elemental iron per day). There was a remarkable improvement in the pica, as he stopped further ingestion of stones (2 weeks after he was discharged), which was confirmed by the parents during the follow-up evaluation in the outpatient clinic.

This patient had been ingesting stones probably over a long period and showed a rare presentation of acute intestinal obstruction. While such a clinical presentation has been reported in the literature,23–25 none of the patients, to our best knowledge, had ingested such a large amount of stones so as to cover the length of the large bowel (from the colon to the rectum). The findings of hematological indices and iron studies suggestive of IDA were consistent with most of the case reports on pica.7,26 It is uncertain whether the iron deficiency led to pica or vice versa in our patient. The anthropometric evidence of malnutrition and the response to oral therapy suggested that iron deficiency may have a role in the pica observed in this patient. According to the adaptive theory, pica results from an attempt to compensate for micronutrient deficiency.5 The presence of micronutrient deficiency creates a physiologic desire to engage in earth eating through the epiphenomena of nutrient deficiencies that alter the appetite-regulating brain enzymes.27 Furthermore, evidence also points to the role of iron as a cofactor for dopamine in the brain with higher concentration in the hippocampus, where its deficiency has been proposed to alter an individual behavior. On the other hand, studies have also shown that geophagia could lead to a reduction in iron bioavailability owing to the dietary iron adsorption to the earth particles, thereby impairing iron absorption by the earth binding to the mucin layer of the intestine.28 Both mechanisms have been identified as a possible cause of iron deficiency resulting from pica.28

Treatment for lithobezoar is often dependent on the size of the stones and the clinical state of the pediatric patient.16,17 A conservative management approach has been advocated for colonic lithobezoar involving large stones that may be difficult to remove endoscopically without the risk of damaging the gut.23 In our patient, intestinal obstruction was relieved within 3 days of oral laxative use and a rectal wash-out. Additionally, iron therapy resulted in remarkable improvement of pica in our patient.

Although iron deficiency remains more prevalent among Nigerian children than others, lithobezoar as a cause of intestinal obstruction is uncommon. When a pediatric patient presents with intestinal obstruction from massive ingestion of stones, a conservative approach (eg, use of laxatives and rectal wash-out) is an option for relieving the obstruction. Furthermore, iron studies should be carried out and the patient should receive therapy where indicated.

Written informed consent was obtained from the parents for the publication of this case report.

All authors contributed toward data analysis, drafting, and revising the paper and agree to be accountable for all aspects of the work.