Back to Journals » Clinical, Cosmetic and Investigational Dentistry » Volume 9 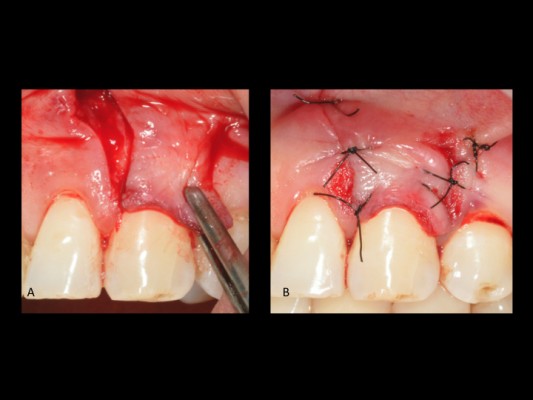 Abstract: Gingival recession is the most common mucogingival defect, characterized by apical migration of the gingival margin from the cementoenamel junction and root exposure. Several surgical techniques are reported for the treatment of gingival recession. Here we present a comparison of the conventional (coronally advanced flap) and semilunar coronally positioned flap techniques for root coverage in teeth with cervical abrasion restored with pink resin that mimics the color of the gingiva. Although the conventional technique is more predictable, we found that both techniques were effective in achieving satisfactory and esthetic root coverage.

Gingival recession is one of the most common defects found in the oral cavity. It is characterized by apical migration of the gingival margin from the cement enamel junction, which is caused by the loss of connective tissue fibers and is accompanied by resorption of the alveolar bone crest and necrosis of cementum tissue.1,2

Gingival recession results in poor esthetics, particularly while smiling or talking. The primary symptom is root hypersensitivity, and it may also be associated with root caries and cervical abrasion.

Techniques for root coverage in patients with gingival recession vary according to local anatomical features such as the height and depth of the cervical abrasion,7 extension of the affected areas of the crown and root, length of the gingival recession, presence of keratinized tissue, and, most importantly, esthetic requirements of patients.5

Only defect restoration will not resolve poor esthetics because it results in an excessively long tooth.2,4,8 Similarly, only mucogingival therapy for root coverage cannot completely cover the abrasion, thus resulting in persistent dentin hypersensitivity.2 Several surgical procedures for root coverage have been successfully conducted;9–11 furthermore, several restorative materials are now available for the reconstruction of lost hard tissue before the surgical procedure for root coverage.5,9,10 However, few studies have reported the combination of composite resin restoration for the treatment of cervical radicular abrasions and surgical root coverage.12–14

Here we present a comparison of the conventional and semilunar coronally positioned flap techniques for root coverage in teeth with cervical abrasion restored with pink resin mimicking the color of the gingiva.

A 55-year-old female patient was presented at the Department of Periodontics at Positivo University with chief complaints of unsatisfactory esthetics because of receding gums in her maxillary front teeth and sensitivity to thermal stimuli in the same teeth.

Anamnesis and clinical examination revealed good systemic health, with no history of drug abuse or smoking. Radiological examination revealed no interproximal bone loss, while clinical intraoral examination showed good gingival health. The bilateral maxillary canines showed gingival recession, with 3 mm, thick gingival biotype and 4 mm high-keratinized gum (Figure 1 A and B). We concluded that traumatic brushing was the possible cause of recession and accordingly provided instructions regarding oral hygiene, brushing technique, use of a soft brush, and regular change of the brush.

Next, the restoration was planned only for the cervical abrasion area in the canines, using light-cured composite resin mimicking the color of the gingiva (Amaris Gingiva, VOCO, Cuxhaven, Germany). Following shade selection (Figure 2A), initially, the Admira Bond (VOCO) adhesive system was used according to the manufacturer’s recommendations. Next, an opacifier in white color was applied. This resin was applied to mask the dark background of the stained substrate (Figure 2B). Immediately after, the pink resin was applied to mimic the surrounding soft tissue, and thereby it was possible to harmonize the color of the resin with the soft tissues. Finally, the finishing and polishing was performed with sandpaper disks and drills for resin (Figure 3).

Subsequently, we decided to perform root coverage using the conventional (coronally advanced flap) and semilunar coronally positioned flap technique for the left and right canines, respectively, in order to compare the clinical outcomes of the two techniques.

For the left canine, we placed an intrasulcular incision with preservation of the papillae using a scalpel with a No. 15C blade. Then, we placed mesial and distal vertical relaxing incisions and raised a mucoperiosteal flap (Figure 4). Using a periosteal Molt 7A spatula, we completely shifted the flap apically to provide the tissue with complete mobility, which subsequently facilitated coronal advancement of the soft tissue (Figure 5A). To stabilize the flap, each suspension suture was placed in the mesial and distal papillae, while simple sutures were used to close the relaxing incisions (Figure 5B).

For the right canine, we placed an internal bevel incision using a scalpel with a No. 15C blade. The incision was placed above the mucogingival line in a half-moon shape, preserving the interdental papilla (Figure 6A). A vascular pedicle with a minimum of 2 mm thickness was maintained for adequate blood supply. Then, the flap was divided for traction in the coronal direction. The coronally positioned tissue was stabilized with mesial and distal suspension sutures, leaving the most apical portion of the connective tissue exposed for healing by secondary intention (Figure 6B).

The patient was prescribed an analgesic (paracetamol, 750 mg every 6 hours) as necessary, an antibiotic (amoxicillin, 500 mg every 8 hours for 7 days), and chemical plaque control measures (0.12% chlorhexidine rinse, every 12 hours for 14 days), and was instructed on oral hygiene and care of the surgical sites. The sutures were removed after 15 days.

Regular follow-up examinations were conducted at day 21 and 3, 6, and 12 months after the surgeries. Partial root coverage on both sides was observed at 21 days (Figures 7 and 8), with no dentin hypersensitivity and satisfactory esthetics. After 12 months, almost complete root coverage was observed on both sides (Figures 9 and 10), although esthetics were better for the right canine because of a less visible scar. Written informed consent was obtained from the patient to publish this paper and accompanying images.

The initial height of the recession is an important factor that should be taken into consideration because of its influence on the results. The higher it is, the lower the complete root coverage frequency. Gingival recessions equal to or higher than 3 mm have worse prognosis of root coverage.14

The coronally positioned flap was classified as a pedicle soft tissue graft because of vertical movement in the coronal direction. This flap provides a great combination of color, texture, contour, technical simplicity, little pain and postoperative discomfort (because scarring is by first intention), and good vascularization of tissue moved through the pedicle.21 This surgery requires only a single surgical site, and it is recommended for the treatment of areas with Miller Class I recession, in the case of recessions up to 3 mm, where there is sufficient keratinized mucosa apically from the gingival margin and tissue thickness of at least 1 mm as it was observed in this case.20 However, it is not indicated for patients with a shallow vestibule, or thin gingival tissue.23 It is necessary to emphasize the importance of adequate surgical planning, considering multiple factors such as the type of recession, quantity and quality of keratinized tissue, tooth position in the arch, flap type, and degree of bone loss among other factors, in order to gain a favorable clinical outcome. Furthermore, the root surface treatment must also be carried out to produce a positive tissue reaction.8,9

In 1986, Tarnow19 modified the apical incision and advocated a half-moon shape parallel to the contour of the recession, naming this technique as the semilunar coronally positioned flap technique. This is indicated for shallow localized or generalized recession that does not extend beyond the mucogingival junction, with no interproximal bone loss (Miller Class I), as observed in the present case.

In particular, combined restoration and root coverage are necessary for cases of deep cervical abrasions, because the latter can interfere with the adaptation of soft tissue flaps on the root surface when not restored, while an attempt to plane the surface would require the removal of a large amount of healthy tooth tissue.23

The outcomes observed in our patient were consistent with those reported in other studies.9,10,16,23,24 Dragoo13 established the biocompatibility of glass ionomer cement placed under gingival tissue; however, the use of restorative materials such as composite resin was reported to resolve the issue of poor esthetics.8,9,24 Histologically, long junctional epithelium formation was reported with both glass ionomer and composite resin, demonstrating the biocompatibility of both materials under gingival tissue.24 This biocompatibility can also be clinically observed, evidenced by the absence of inflammatory signals. We used pink resin for cervical restorations in the present case, the properties of which allow for good finishing and polishing and superior esthetics.

The findings of this case suggest that the use of pink resin associated with the conventional and semilunar coronally positioned flap techniques achieves satisfactory esthetics and root coverage, with an excellent combination of color, texture, and gingival contour. Both techniques can be used for covering gingival recession when the teeth show appropriate indications and the surgeon is well trained; however, a conventional technique has advantages over the semilunar technique, as it is more predictable and has a lower surgical morbidity.