Back to Journals » Clinical Interventions in Aging » Volume 12 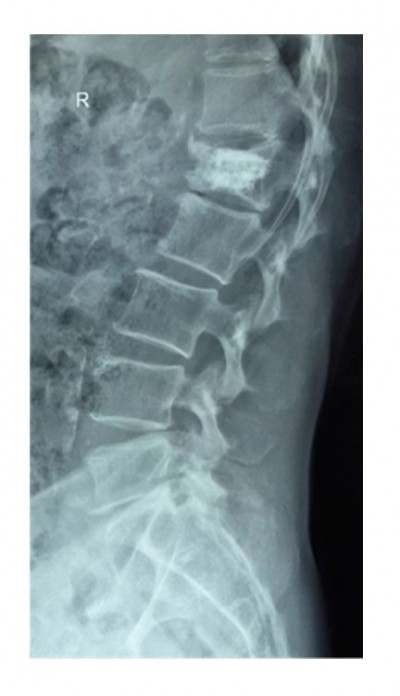 Osteoporotic vertebral compression fracture (OVCF) is a common condition, especially among elderly population. In the US, ~40% of women at the age group of 80 years old suffer from OVCF. The incidence of OVCF is expected to increase with the growing of aging population.1 Patients with OVCF often experience difficulties in daily activities with their quality of life substantially being reduced. The available treatment options include surgical procedures, such as percutaneous vertebroplasty (PVP) and percutaneous balloon kyphoplasty (PKP). PVP performed under local anesthesia is minimally invasive, and thus is a preferred option for patients older than 80 years.2,3 The procedures of PVP include injection of bone cement, such as polymethyl methacrylate (PMMA), into a fractured vertebral body. This reduces pain and prevents further collapse of the vertebral body. Some patients, however, experience recompression of the PVP-operated vertebrae or new fractures at the neighborhood vertebrae.4 The incidence of subsequent fractures after PVP is not uncommon.5,6 Several reports have suggested that cement volume and distribution in treated vertebral body are potential risk factors for recompression.7–10 The treatment of recompression at the operated vertebrae remains challenging. Therefore, it is important to understand the measures that we can take to prevent recompression. In this study, we compared different clinical and surgical parameters between repression and control groups, and we evaluated whether they are associated with the recompression of the operated vertebrae.

A total of 172 patients were diagnosed with OVCF. These patients received PVP treatment at the Department of Orthopedics, Beijing Hospital, People’s Republic of China, between January 2008 and June 2013. Among these patients, 82 had complete information with mean follow-up times of 29.6 months (range:12–68 months). Patients were divided into two groups according to whether recompression was observed during the follow-up period. The two groups were 1) recompression group (n=50) and 2) control group (no recompression, n=122). The recompression group comprised 29 males and 21 females, with a mean age of 87.08 years. The control group comprised 122 patients (59 males and 63 females), with a mean age of 86.92 years. The preexisting medical conditions of patients included the following: high blood pressure (65 patients), ischemic heart disease (18 patients), atrioventricular block (13 patients), diabetes (32 patients), cerebrovascular diseases (18 patients), chronic obstructive pulmonary diseases (14 patients), and asthma (four patients). This study was approved by the Institutional Review Board of the Ethics Committee of Beijing Hospital. All participants received written and oral information prior to giving written consent, and the study was performed in accordance with the Helsinki II declaration.

Patients in this study were all elderly. Complete examination and assessment of anesthetic risks were performed carefully before surgery. Patients with high blood pressure were given oral antihypertensive drugs to allow blood pressure to return to normal. Patients with symptoms of cardiac dysfunction underwent echocardiography, in which the left ventricular ejection fraction was required to be higher than 55% with no serious structural abnormalities observed in heart chamber and heart valves. Patients with cardiac conduction disturbances were examined using electrocardiogram (ECG); for those with bigamy of premature ventricular contractions, ECG was monitored for further 24 hours to ensure absence of serious heart diseases. For patients with ischemic heart disease, myocardial scintigraphy or computerized tomography (CT) scan on coronary arteries were performed to preclude patients with severe coronary artery stenosis or myocardial ischemia. Patients with prophylactic use of anticoagulants for cardiovascular and cerebrovascular diseases were required to stop taking aspirin for 3 days and oral clopidogrel/warfarin for 1 week before surgery. Routine subcutaneous injection of low-molecular-weight heparin was prohibited 12 hour before surgery; coagulation and platelet aggregation function were examined before surgery. Patients with diabetes continued to use medications, and their fasting blood glucose level was ~8.0 mmol/L and 2 hours postprandial blood glucose <13.0 mmol/L. Patients with COPD and asthma had no report on shortness of breath when in the prone position for 30 minutes. There were 18 patients with cerebrovascular disease; preoperative cranial magnetic resonance imaging examination was performed to ensure no new lesions in 6 months.

Inclusion criteria were as follows: 1) age ≥80 years; 2) first single segment OVCF at thoracic or lumbar spine; 3) local anesthesia on single vertebral, PVP being performed using bilateral pedicle puncture technique, with less than 3.0 mL total volume of bone cement injected; 4) patients being conscious and able to communicate clearly and provide ratings; 5) no allergic reactions and cardiac toxicity to bone cement; 6) no leakage of bone cement in the spinal canal; 7) no postoperative complications; and 8) completion of at least 1 year of follow-up and adherence to >80% of the standard anti-osteoporosis medication.

Exclusion criteria were as follows: 1) spinal metastases or history of cancer in combination with OVCF; 2) bone metabolic diseases; 3) damage of posterior wall of the vertebral body; 4) severe degenerative spinal deformities (such as scoliosis and kyphosis); 5) bone mineral density (BMD) less than −5.0; 6) symptoms of nerve root damage before surgery; 7) serious medical complications; 8) previous or concomitant use of hormone; 9) infection at sites of surgery; 10) intervertebral cleft; and 11) PMMA not used as bone cement material.

Patients had no signs of trauma or only had a history of minor trauma. They often experienced back or lower back pain, in which the pain relieved in a supine position but worsened in erect stance. The location of the pain could be different from the location of the fractured vertebrae. During the examination of vertebral fractures, pain was experienced in response to percussion. All eligible patients had a detailed medical history and a complete physical examination was performed. Thoracolumbar lateral X-ray, and thoracic and lumbar magnetic resonance imaging scans were performed to rule out other spinal anomalies. Patients were diagnosed with OVCF (fractures of <3 weeks). At follow-up visits, patients were required to take thoracolumbar lateral X-ray.

Patient was in prone position, with the fractured vertebra region supported. Using C-arm fluoroscopy, the location of fracture was identified. Surgical procedures were performed under local anesthetic with 1% lidocaine. Under guidance of X-ray, the needles were inserted at positions 10 o’clock of the left pedicle and 2 o’clock of the right pedicle at the craniolateral border of the pedicle. The needle was advanced through one-third of the anterior part of the affected vertebral body. The PMMA bone cement was prepared at appropriate viscosity and was injected. The injection process was monitored under lateral fluoroscopy to achieve appropriate filling of the space in the vertebral body. After 24 hours of surgery, patients were allowed to move freely with the aid of a waist protector.

Recompression of the operated vertebral body was assessed through medical history, clinical manifestations, and X-ray imaging. Patients usually had back pain relieved within days after surgery, but later reappeared. X-ray imaging showed a decreased anterior body height at >1.0 mm, an increased Cobb angle >3°, and an increased kyphosis angle in the last follow-up visit when compared to day 1 after surgery.

To identify the risk factors associated with the occurrence of recompression, multivariate logistic regression analysis was performed (Table 2). The results indicated that when compared to the patients with bone cement distributed in the middle of vertebral body, lower risk was found in the “both upper and lower endplates” group (odds ratio [OR] =0.233, P=0.003), whereas the “above lower endplate” (OR =2.013, P=0.008) and “below upper endplate” (OR =1.155, P=0.353) groups had higher risk of recompression.

There are many factors that contribute to the occurrence of recompression in patients with OVCF after PVP treatment, and the distribution of bone cement is one of the factors that can possibly be controlled by the surgeon. Gaughen et al6 suggested that sufficient filling of bone cement in vertebral body is a key factor associated with recompression. PMMA is the material that has been widely used in PVP treatment. Its distribution pattern is primarily in a solid lump; as such there are areas in the vertebral body that are not supported by PMMA. It has been found that recompression usually occurred at these non-PMMA supported areas.

This study has several limitations. First, two-dimensional X-ray images were used to determine the distribution of bone cement. In these images, fine structures are sometimes difficult to observe due to the overlaying bone cement. For accurate determination of bone cement distribution, three-dimensional CT scans will help. Second, the present study used a criterion, that is, decreased anterior body height of >1.0 mm, to assess the recompression. This criterion is very sensitive, and it is possible that some cases in the recompression group are false positives. Third, the quantification of the degree of contact between the bone cement and upper/lower endplates will provide data for a more comprehensive analysis; however, this will require a larger sample size. Finally, we found the total volume of bone cement injected and the severity of compression before surgery may also affect the dispersion of bone cement, as well as the strength of the vertebrae after surgery. Indeed, studies have shown that the cemented vertebral lead to increased endplate bulge and an altered load transfer in adjacent vertebrae, suggesting the importance of having optimal cement volume.13,14 However, we cannot draw a conclusive relationship between the cement volume and recompression rate due to the limited number of cases investigated.

In conclusion, we found that the distribution pattern of bone cement contributes to the occurrence of recompression in patients with OVCF. Some of the surgical techniques could improve the filling of bone cement in the vertebral body that help reduce the risk of future recompression.