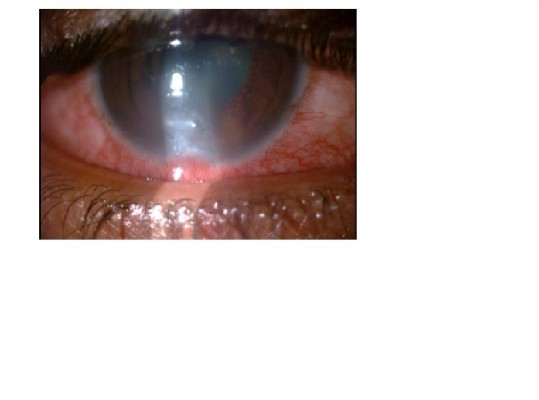 This paper has been retracted

Background: To report a rare presentation of culture-positive Mycobacterium chelonae corneal ulcer and its management.
Findings: We report a rare case of a patient with a history of chronic pain and blurriness of vision. Examination revealed a chronic nonhealing paracentral corneal ulcer inferiorly at the 5–7 o'clock meridian with anterior chamber reaction unresponsive to routine antibiotic and antifungal medications with Mantoux test positivity in a middle-aged nondiabetic patient with no prior history of trauma, ocular surgery, and contact lens usage. Ziehl–Neelsen staining of the nonhealing ulcer revealed acid-fast bacilli typical of M. chelonae, with subsequent culture positivity in Löwenstein–Jensen medium. Subsequent treatment with topical fortified amikacin and tobramycin resulted in rapid healing of the corneal ulcer.
Conclusion: M. chelonae presenting as a chronic nonhealing corneal ulcer spontaneously occurring in a healthy adult with no predisposing factor draws attention towards the need to have a good index of suspicion by performing a Ziehl–Neelsen stain and culture, and subsequent successful management with topical fortified amikacin and tobramycin.

The nontuberculous Mycobacterium chelonae is an omnipresent saprophyte present in soil, water, and air.1 In the eye, the organism is known to cause dacryocystitis, canaliculitis, conjunctivitis, scleritis, endophthalmitis, and keratitis.2,3 Risk factors for infection include both accidental and surgical trauma, laser-assisted in situ keratomileusis (LASIK), penetrating keratoplasty, and all procedures involving retained biomaterial.2,3 Breakdown of the corneal epithelium due to surgical trauma increases the risk of surface infection and increases the virulence of these rapidly growing mycobacteria.4 Nonhealing corneal ulcers unresponsive to routine antibacterial and antifungal agents but with normal corneal sensations are usually associated with underlying diabetes mellitus and systemic immunocompromised states. Nocardia and atypical mycobacteria like M. chelonae and M. fortuitum, and scrofuloderma have been identified as uncommon infective causes of chronic nonhealing corneal ulcers.5 A history of trauma with foreign body (usually metallic), prior ocular surgery, or contact lens usage is usually present in such cases.6 Local iatrogenic insult or systemic immunosuppression has been identified as the most common cause of nontuberculous mycobacteria-associated ocular infections.6 Due to frequent delays in diagnosis, M. chelonae, being rapid growers, leads to significant complications such as blindness.6 Spontaneous corneal infection with the bacillus occurring in the absence of any predisposing factor in a healthy young adult has not been reported till date. Herein, we report a very rare case of a nonhealing corneal ulcer with Ziehl–Neelsen (ZN) stain and culture positivity for M. chelonae, and describe its management.

Ethical permission for this case report was obtained from the Nethradhama Eye Hospital institutional review board. A 40-year-old man, clerk by occupation, came with symptoms of pain, photophobia, watering, and blurring of vision in his right eye over a 2-month duration. He was in good general health and had no history of any systemic diseases, recent ocular trauma, ocular surgery, and contact lens use. He was diagnosed elsewhere with a nonhealing corneal ulcer and was on topical fluoroquinolone and antifungal fluconazole eyedrops. However, his condition showed no improvement. His earlier reports showed a positive Mantoux test with induration of 18 mm done 1 month previously, normal blood sugar levels, and seronegativity for HIV and hepatitis B and C virus. TB Gold test was negative. Upon presentation, best-corrected visual acuity was 0.48 logMAR in the right eye and 0.00 logMAR in the left eye. Slit lamp biomicroscopy in the right eye revealed a paracentral 3×3 mm horizontally oval corneal ulcer at the 5–7 o’clock meridian inferiorly 2 mm away from the limbus with underlying stromal edema (Figure 1). Corneal sensations over the ulcer were normal. Circumcorneal congestion was present. There were no satellite lesions. It was a whitish dry-looking ulcer. Anterior chamber showed mild reaction with 1+ cells and no hypopyon. The ulcer stained positively with fluorescein. The right pupil was reacting sluggishly to light in view of prior use of homatropine eyedrops that the patient had stopped using 1 week previously. Fundus showed mild vitreous haze with no focal retinal or choroidal pathology. Intraocular pressure was 18 mmHg on noncontact tonometry. The lacrimal sac bilaterally showed no regurgitation on pressure, and syringing showed patent lacrimal passage. B-scan ultrasonography was done. It was essentially normal with no evidence of scleritis. Systemic examination revealed no lymphadenopathy and clear respiratory system. Scraping was done with a number 15 blade and sent for microbiological examination. Gram staining revealed Gram-positive, irregular stain and forms of M. chelonae. ZN staining revealed acid-fast bacilli – red magenta rods typical of M. chelonae. Further culture on Löwenstein–Jensen media at 1 week revealed characteristic M. chelonae colonies – circular, smooth, and pale cream. The microorganism was identified based on its phenotypic characteristics, such as pigmentation of colonies growing in the darkness on Löwenstein–Jensen media – white, cream pigment production (nonchromogenic). Iron reuptake test was negative. Identification to species level was achieved on the basis of the growth characteristics, including growth in <7 days, growth at 37°C, failure of growth in the presence of 5% sodium chloride, pigment production, and positive catalase test. The patient was started on topical fortified amikacin (50 mg/mL) and tobramycin (14 mg/mL), and the symptoms resolved rapidly, with no presence of anterior chamber cells, and the ulcer healed in 3 weeks (Figure 2) with best-corrected visual acuity improving to 0.18 logMAR at 1 month posttreatment. The patient is on constant follow-up to look for any recurrence of infection. Written informed consent for the information to be used in this case report was obtained from the patient.

Spontaneously occurring M. chelonae infection presenting as a nonhealing corneal ulcer in a healthy young adult with no predisposing factor has not been reported till date. Nontuberculous mycobacteria (NTM) are aerobic, nonspore-forming, nonmotile acid-fast bacilli. Runyon proposed a classification of NTM, under which group IV is the M. fortuitum complex, consisting of M. fortuitum, M. chelonae, M. smegmatis, and M. vaccae.7 NTM have been isolated from the normal flora of human sputum, gastric contents, and ocular surfaces and are ubiquitous in soil, animals, milk, foodstuffs, tap water, and laboratory water.1 Both M. fortuitum and M. chelonae are responsible for a growing number of skin and soft tissue diseases. NTM is also well established as a cause of nonhealing corneal ulcers. Girgis et al8 in their retrospective study of ocular infections caused by NTM, reported 36.6% incidence of keratitis most commonly caused by M. abscessus/chelonae, with identifiable risk factors being the presence of biomaterials (63.1%), ocular surgery (24.1%), and steroid exposure (77%). Feder et al reported a case of concurrent unilateral M. chelonae keratitis and canaliculitis in a patient with a SmartPLUG (Medennium Inc., Irvine, CA, USA).3 Chandra et al9 and Freitas et al10 reported a cluster of cases of patients developing M. chelonae keratitis following bilateral simultaneous LASIK, with successful treatment with topical amikacin, azithromycin, and ciprofloxacin in most cases. Surgical debridement and flap removal was required in some instances. Yamaguchi et al11 reported 39 eyes of 30 patients developing mycobacterium keratitis following LASIK. Lalitha et al12 reported six of the 18 cases of NTM ocular infections presenting as corneal ulcers with sensitivity to gentamicin and amikacin. Huang et al13 in their retrospective review of 22 cases of NTM keratitis revealed a causal history of trauma in 18 cases and ocular surgery in two cases (post-pterygium excision and post-failed corneal graft). They found ocular surface disease in a patient with cicatricial pemphigoid, and one case with postneuropathic keratopathy following cerebellopontine angle tumor removal. Malecha and Doughman14 reported a case of M. chelonae keratitis associated with soft contact lens usage. Lim Bon Siong and Felipe2 reported 13 cases of ocular NTM infection post-phacoemulsification cataract surgery, of which 77% presented with stromal wound abscesses. Keratitis is the most common type of ocular NTM infection, most commonly caused by rapid growers M. chelonae and M. fortuitum. Typical “cracked windshield” appearance of cornea is considered diagnostic.13 Most of these cases have a history of preceding ocular trauma, usually with metallic foreign body, or prior history of ocular surgery, contact lens wear, or systemic immunosuppression. The unpredictable response to topical antibiotic therapy and frequent need of surgical intervention like lamellar keratectomy and penetrating keratoplasty lead to significant visual morbidity.9,10 Early recognition and prompt institution of appropriate antibiotic in accordance with antibiotic sensitivity testing is important. Identification and culture of the organism from corneal scrapings forms the basis of definitive diagnosis. We report a case of spontaneously developed ZN smear- and culture-positive active NTM ocular infection with focus in cornea presenting as a nonhealing corneal ulcer with no known predisposing factor. Early recognition and prompt institution of topical amikacin prevented the ocular morbidity. Till date, M. chelonae keratitis has been reported consequent to some trauma or iatrogenic intervention, or in immunosuppressed states. However, the possibility of incidental environmental inoculation cannot be ruled out. The present case stresses the importance of considering M. chelonae in the differential diagnosis of nonhealing corneal ulcer, even in non-predisposed healthy adults, and the role of subsequent early institution of appropriate sensitive drugs in preventing the consequent visual morbidity and the need of surgical intervention.